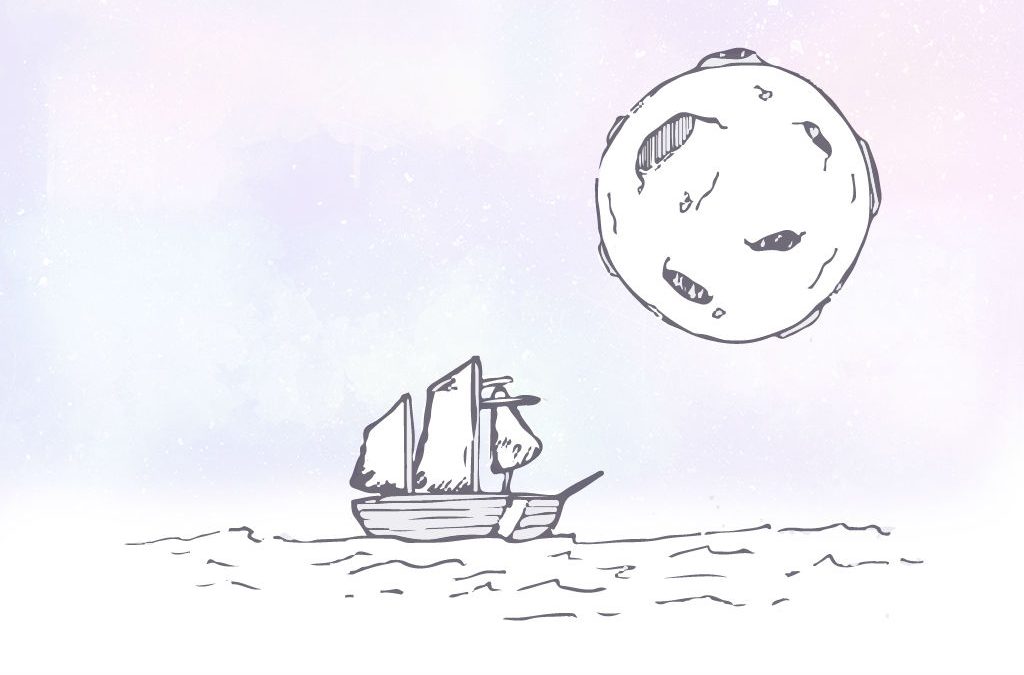 Fifty years ago as man landed on the moon, darkness descended over West Papua. Author and journalist Hugh Lunn writes about how while the world was looking up to the sky, a region of people lost their place on planet Earth.

As man landed on the moon above the world, four men sat with me at the end of the Earth caressing their thousand-year-old stone axes.

These axes – each made from a sharp smooth black stone bound by vine into a hollowed forked tree branch – were their tools of trade: aesthetic and precisely proportioned, and Stone Age.

We were at the bow of a ship ploughing along the Equator, with the moon in half-bloom overhead. Through the static of my portable radio, I enthusiastically explained that a spaceship had landed on the moon above us. An American astronaut was climbing down a ladder. He had stepped foot on the moon!

The ship was headed from Manokwari to Fak Fak (pronounced Fuk Fuk) around the “bird’s head” in the top left-hand corner of West Papua, and, as we hunched over the radio the four Papuan men fell silent: no enthusiasm at all as they stared at the needle on the radio’s dial.

Perhaps, it occurred to me, they didn’t believe it. And why should they? These men had never been on an aeroplane; never seen television; never spoken on a telephone.

Just then the Papuan chieftain, Ibrahim Bauw, looked up at the moon with a big smile and said it was good that the Americans had gone there: “Now one day we will be able to go to the moon too. I hope that the Americans will become like the moon and light the Earth.”

Meanwhile, the youngest man fingered the cool sharp stone of his axe and wondered if rocks from the moon would be different from the rocks in Papua. “I would like one of the rocks from that moon for an axe.”
There was great irony in this historic moment.

The whole world was looking up, enthralled by “one giant leap for mankind”, while ignoring what mankind was doing down here on Earth. Because at this very moment in West Papua 800,000 reluctant Papuans of the former Dutch New Guinea were being unjustly subsumed into Indonesia.

This rich verdant land the size of France – with permanently ice-capped mountains on the Equator – had become the centre of an international power play.

When the Dutch lost their colony of the Dutch East Indies to the new Republic of Indonesia, they vowed to keep one part – the western half of the island of New Guinea. They loved the Papuans and, by the way, their geologists said on one mountain alone there was so much gold they could smell it.

America intervened to stop war; to stop Indonesia turning Communist; and, some allege, to stop the mountain of gold going to anyone else.

In 1962 the warring parties met in New York where an “Agreement” was drawn up with Americans at the helm. The Papuans would be given seven years to contemplate their future. Indonesia meantime would administer the country before holding an “Act of Free Choice” – overseen by the UN – so the Papuans could decide their own future.

With almost no roads, the only way to get to all eight province capitals for the Act of Free Choice was either by air or ship. It tells you something of the lack of world interest here on Earth that only two reporters – myself and Amsterdam’s De Telegraaf foreign editor Otto Kuyk – covered the whole thing.

All the foreign correspondents in South East Asia for the world’s most famous newspapers and magazines had come to this isolated part of the world two months earlier to preview the Act of Free Choice. But none returned to cover the actual event because – at exactly the same time – President Nixon decided to tour Asia.

Nixon’s arrival would be the biggest possible news and all correspondents – including myself – were instructed to stay in their city and prepare for coverage at a time when even Reuters sent their stories from Djakarta by Morse Code.

Any incident, any speech, would be the biggest story in the world and move stock markets.

I ignored the instruction and flew to West Papua.

Suffice to say, the Papuans did not get a Free Choice.

Instead of a secret ballot for all adults, Indonesia used their system of “musjawarah” – meeting until an agreement is reached. About 130 men were selected (rather than elected) in each province, given new clothes and gifts such as torches, herded into a hall with Indonesian troops everywhere around and asked to stand up if they chose to be part of Indonesia.

Of course every one of them had to stand – or else be seen to be supporters of the banned Free Papua Movement. The looks on their faces, the contacts made at midnight, the letters soaked in blood, showed Otto and me it wasn’t what the people wanted.

In Manokwari – when it finally dawned that they were going to become Indonesian – Papuans outside the meeting started yelling out “sendiri, sendiri” – alone, alone. Soldiers dressed as civilians quickly picked some up and threw them into the back of trucks. I took a photo of one protestor being hit over the head by an Indonesian policeman’s baton at the same time as a soldier powerfully punched his jaw.

The policeman pulled his revolver and I ran down the hill and back inside to where the future was being decided.

I rushed up to the head of the UN delegation overseeing this “Free Choice”, Dr Ortiz Sans of Bolivia, and told him what was happening outside. “My job,” he said, “is to observe what happens in here.”

Later, back on the ship again, he took pains to explain his position to this 28-year-old Australian.

“(West Papua) is like a cancerous growth on the side of the UN,” he said, “and my job is to surgically remove it.”

The moon lost its glow.

Hugh Lunn’s Over the Top with Jim was the biggest selling non-fiction book of 1991, and his Vietnam: A Reporter’s War was an Age Book of the Year. In 2018 he was inducted into the Australian Media Hall of Fame in Melbourne.